Welcome to another edition of the MAB Insights Series with our Chief Operating Officer, David Hall.

MAB has a long history as a pioneer and master planner of new precincts across Victoria. We were the first developer to begin construction in Melbourne’s Docklands and have more recently created the large-scale, employment-led mixed-use communities of University Hill (Bundoora) and Merrifield (Mickleham) in Melbourne’s north.

We have now commenced work on our next major project – the $3.3 billion Greater Avalon employment precinct, which is a 780-hectare vacant landholding adjacent to Avalon Airport.

Greater Avalon will form part of a dynamic new airport city for Victoria, with a target to deliver diverse employment opportunities close to where people live – a principle MAB has embraced in all our major mixed-use projects.

The project will support economic development and deliver an extra $2.2 billion in gross regional product across the Geelong-Wyndham region and the western Melbourne corridor.  It will attract significant investment to create up to 18,150 new jobs.

The vision for Greater Avalon is aligned with existing and emerging planning policy and ideal for a 21st century business park to complement Victoria’s growth agenda and will create a thriving multi-use precinct and meet untapped industry demand.

Greater Avalon’s focus will be large-scale manufacturing, transport and logistics, warehousing and distribution, and wholesale trade. Core industries like these attract and support an ecosystem of smaller-scale businesses and ancillary services and related training, research and development activities.

Plan Melbourne designates Avalon Airport a state-significant transport gateway. It seeks to protect the airport to secure passenger and freight movement while allowing for adjacent complementary uses and employment-generating activity.  We propose to create an airport-edge development that will provide greater access to global markets, increased business activity and jobs for local people.

The project will complement Avalon Airport’s masterplan and reflect an emerging trend to create ‘airport cities’ on the outskirts of major metropolitan centres. 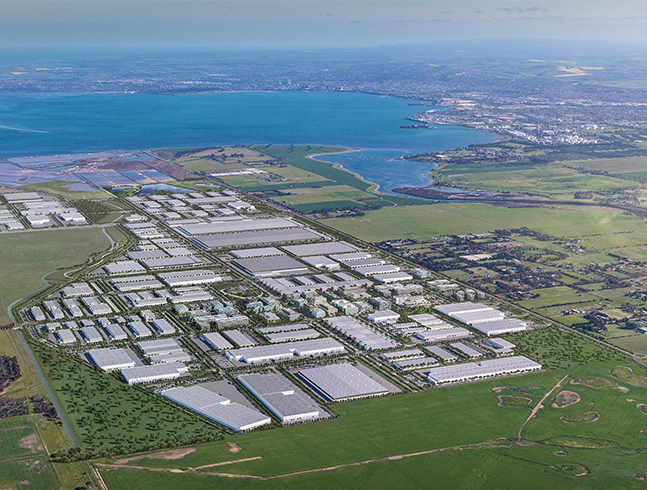 Airports are now driving the preferred location criteria for 21st century industries and urban development, just as rail lines, sea ports, roads and freeways have done historically. Airport precincts have become destinations in their own right as well as places of departure.

Our approach has been informed by the work of Dr John Kasarda, Director of the Centre for Air Commerce at UNC Kenan-Flager Business School in the USA. Kasarda is a world-renowned US academic and leading developer of the aerotropolis concept.

Clusters of businesses and development typologies surround the airport.  This leverages the strength of existing businesses and encourages economic diversification and job growth. A thriving aerotropolis, though, is far greater than the sum of its parts.  It features living urban places that must be planned and designed as appealing environmental and social realms.

The aerotropolis concept is being developed around the world. Well-established examples include Amsterdam’s Zuidas, Dallas-Fort Worth in the USA and South Korea’s Songdo. Aerotropolis principles are also being applied to Changi in Singapore, Badgerys Creek (Western Sydney) and Durban in South Africa.

Greater Avalon provides a critical pillar for an aerotropolis centred on Avalon Airport and for the region to take advantage of 21st century economic opportunities.

Our masterplan consists of business clusters of aviation-oriented commercial, industrial, and logistics facilities, while considering the social and placemaking aspects that foster a healthy and creative community. It achieves this by creating a sequence of generous open green spaces and mixed-use town centres that attract a critical mass of users and activities.

The masterplan design also strives for high environmental and biodiversity outcomes, with over 25% of the site dedicated to ‘green space’- including conservation areas, on, wetlands, waterways and well-designed recreational open spaces.

Affordable land, room to grow and quality port and infrastructure access are key fundamentals to attract Super User occupiers, all factors that Greater Avalon can offer.

Super User activity has become more prevalent in recent years due to improved logistics and infrastructure, allowing businesses to centralise operations. This has driven requirements for large industrial holdings nationally.

In a national context, the Victoria industrial market represents an attractive option based on two simple fundamentals – affordable land and access to quality transport infrastructure.

Melbourne’s west is currently seen as the preferred ‘go to’ location for Super Users, but alternatives are being sought due to high land cost and constricting supply.  Our research shows there are very few options across Melbourne’s industrial nodes to acquire large, serviced, freehold lots today. There are no active developments in the wider Geelong market that constitute genuine targeted opportunities for Super Users.

As evidenced at our Merrifield Business Park in recent years, Super Users seeking to own and operate their premises are attracted to well-priced land provided it has strong infrastructure connections when available to purchase.

Given its scale and competitive transport advantages, Greater Avalon presents a real option for Super Users and we can leverage this opportunity to secure Victoria’s competitiveness for national and international large lot industrial occupiers well into the future.